Gold is an important part of the modern investment portfolio. Because it typically behaves differently than stocks and bonds, it can function as a diversifier and thereby reduce overall portfolio risk. In addition, investors often buy gold coins, bullion, and ETFs as hedges against inflation and currency devaluation, roles that have become even more important in recent years.

Many gold investors prefer buying the physcial metal to so-called paper gold. Physical gold is the thing itself, usually in the form of bars and coins. Paper gold products like ETFs or mining shares are more like promissory notes representing gold or the possibility of future profits based on it.

Buyers of physical gold prefer it because they want the actual asset in their possession in case of emergencies. Physical metals carry no counter-party risk whereas paper always runs the additional risk of default by ensuring institution, like a bank or ETF issuer . At AGE, we deal only in physical metals for just this reason.

How to buy gold bullion

Bullion coins like American Gold Eagles, Gold Buffalos, and Krugerrands are an easy way to buy physical gold for individual investment, surpassing gold bars in popularity. They are small, easy to transport, and extremely difficult to counterfeit. Most contain a full ounce gold. A handful of official government mints produce gold bullion coins, selling them to investors through gold dealers at typically small premiums. They include: Perth Mint of Australia, Austrian Mint, British Royal Mint, Chinese Mint, Royal Canadian Mint, South African Mint, and United State Mint. American Gold Eagles, made by the U.S. Mint, are the most popular gold bullion coins sold in America. Highly liquid, they may be bought and sold through alomst any gold ofr coin dealer.

Many investors buy gold coins minted Pre-1933 as an alternative to modern bullion. These are coins that were minted by governments for circulation long ago, back when gold was still money. Pre-1933 US coins, European gold, and World gold dominate this market. Many trade at prices very close to their underlying gold melt value. Others, like truly rare US coins in higher Mint State grades, trade at sizeable premiums over melt.

Pre-1933 coins offer advantages over modern gold bullion. They are old, historic, and collectible. Perhaps more important, they can be quite scarce, especially compared to modern gold bullion coins, which means they can increase in value at a faster rate than bullion.

The scarcer the coin, the greater its premium over gold melt value. In a rising gold market when demand really heats up, scarce coins typically appreciate by more than common coins, supplying additional leverage to the rising gold price. Modern gold bullion coins are made in virtually unlimited numbers each year and offer no premium for scarcity.

Gold has been synonymous with wealth and status throughout human history. From ancient times right up to today, gold has been at the center of economic and cultural life in virtually every major civilization.

Why has gold been so universally valued for so long? To begin with, gold is rare and beautiful, with a lovely yellow color and lustrous glow. Gold does not tarnish or degrade, so it embodies a kind of permanence in a changeable world. Yet, paradoxically, gold is also soft and malleable, so it can be remade into an endless variety of forms.

Gold can be drawn into wire, hammered into thin sheets, fashioned into jewelry, or sculpted into figurines. In modern times, because of its high electrical conductivity, gold is used in many industrial applications. Perhaps most important, gold is easily stamped into coins, making it ideal for use as money.

Until the Mid-20th Century, monetary systems were based on gold and, to a lesser degree, silver. Simply put, gold and silver were money. In most cases, the value of gold by weight was fixed by law. The value of gold currency was therefore determined by the amount of gold it contained.

Today, our currency is merely symbolic. Rather than gold or silver, paper and non-precious metals are now the substance of our money--along with government promises. Copper pennies aren't even copper anymore, but mostly zinc. Governments now decide what money is worth (so-called "fiat currencies") and there is not enough gold to back it all.

While gold is no longer the backbone of the world's monetary system, it still plays a crucial role. The central banks of most nations hold gold as part of their currency reserves. Over the past ten years, in fact, central banks have been adding to their gold holdings at the fastest pace in many decades. Why? For the same reason savvy investors add gold to their portfolios: to hedge against the devaluation of paper money, whether by inflation or the arbitrary actions of governments.

After the global financial crisis of 2008 and 2009, governments began massive campaigns of monetary stimulus to get the world economy back on track. Central banks have flooded monetary systems with cash via low or negative interest rates and quantitative easing, which is tantamount to simply printing money.

This huge increase in the money supply is often viewed as raising the risk of currency devaluation and long-term inflation--when there is more money in the system, it becomes less valuable. Because gold is considered a long-term store of value outside of the paper money system, it is used by individual investors and central banks to offset the risk of currency devaluation and inflation.

Gold's value remains intrinsic, so it is ultimately independent of "fiat currencies." For central banks as well as individuals, gold can act as portfolio insurance during times of turmoil or inflation. In this way, gold is the currency of last resort, beholden to no one for its value. 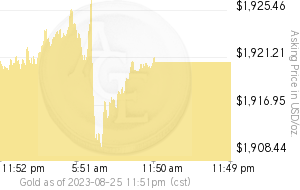 US Gold Coins By Date