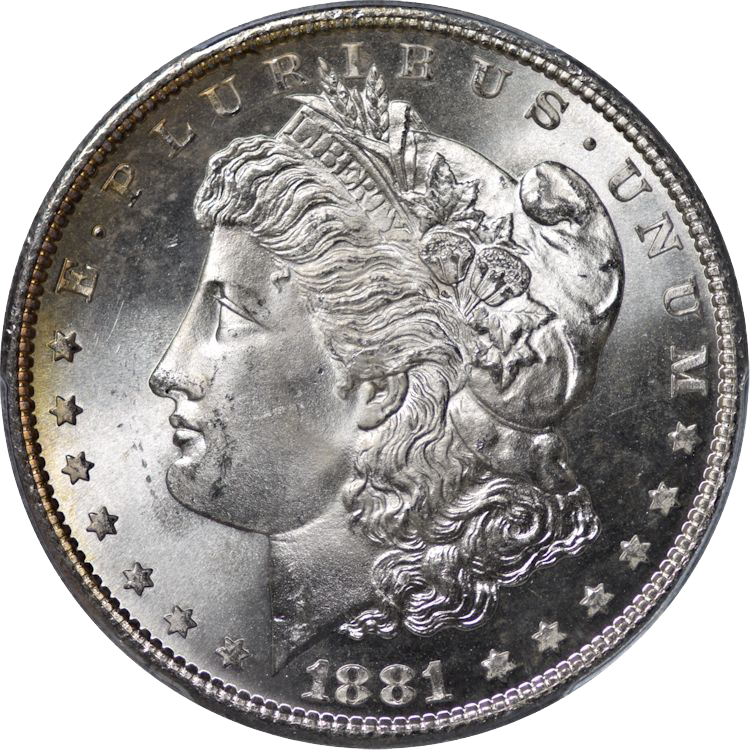 U.S. Morgan Silver Dollars are the most popular and widely collected of all U.S. silver coins. Minted between 1878 and 1904 in Philadelphia, New Orleans, San Francisco, and Carson City, these classic silver coins served as the backbone of daily commerce, both nationally and internationally, for many decades. Today, Morgan dollars remain extremely popular with coin collectors and silver investors because of their large silver content, superb minting, rich history, and iconic design.

In 1921, The Morgan dollar was brought back after a 16-year hiatus for a single-year mintage at the Phildelphia, San Francisco, and Denver Mints. This is usually considered a a type unto itself, and is traded separately as the 1921 Morgan Silver Dollar.

Named after their designer, George T. Morgan, Morgan Silver Dollars are also known as Liberty Head dollars because of the radiant, dignified profile of Miss Liberty featured on the obverse. The reverse depicts the inspiring image of an American Eagle, standing tall with widespread wings, perched confidently upon the olive branch of peace and the arrows of military strength.

Although Morgan silver dollars were minted in large quantities, very few survive today. As result of the Pittman Act of 1918, nearly 270 million Morgan dollars were melted down into silver bars for export, and further melting occurred in the 1960s and 1980s when silver prices skyrocketed.

Morgan silver dollars provide all of the benefits of silver bullion plus extra benefits like strong collector demand, financial privacy, and extra premium potential because of their extreme scarcity, all for little additional cost.

All of our Mint State Morgan silver dollars are certified for grade and authenticity by PCGS or NGC, the most-trusted independent certification companies. They are then hand-select by AGE for outstanding eye-appeal and superior technical merit within grade.

Morgan Silver Dollars were struck at the Philadelphia Mint from 1878 to 1904 and again in 1921. Because Philadelphia was the only U.S. Mint until 1838, its coins carry no identifying mintmark. They are referred to as P-mint silver dollars.

The Philadelphia Mint virtually embodies the history of the United States. In 1792, in one of its first official acts, Congress established the Mint in Philadelphia, the original capital city of our fledgling country and home to such genuine American icons as Ben Franklin and the Liberty Bell.

George Washington was so eager for the new Mint to succeed that he donated the silver for its first coin, a "half-disme" or half-dime, from his household silverware. David Rittenhouse, a leading American scientist and the first Director of the Mint, oversaw its production. None other than Thomas Jefferson hand-delivered the Mint's first coin to the Father of our Country for his approval.

Minted between 1879 and 1904, "O" mint Morgan Silver Dollars are a wonderful reminder of the rich history and cultural legacy of Mississippi River paddlewheelers, plantations, street cars, and the genteel Old South at its best.

Located on the edge of the legendary French Quarter, adjacent to the Mississippi river docks, the New Orleans Mint was the first branch mint in the United States. Before it opened in 1838, every U.S. coin had been struck at the original mint in Philadelphia. President Andrew Jackson himself pushed for the establishment of the new mint order to meet the needs of the growing Southern States and to spur the nation's Westward Expansion.

The legendary San Francisco Mint opened its doors in 1854, primarily to convert gold from the Californian Gold Rush and silver from the Comstock Lode into coins for the growing population of California. The rich history of the American West is literally embodied in the coins from this fabled mint. After the tragic earthquake of 1906 it was one of the few buildings left standing, earning it the nickname the Granite Lady.

Struck between 1878 and 1921, Morgan Silver Dollars from San Francisco are especially prized among collectors because of their exceptionally sharp strikes and blazing mint luster. San Francisco used the newest and most modern press of all the mints during this era. The extremely high pressure generated by the new press gave "S" mintmark Morgan Silver Dollars their famous luster, or surface glow, and their bold, full strikes.

The Carson City Mint is perhaps the most fabled of all U.S. Mints. Opened in the Nevada badlands in 1870 to process the Comstock Lode, the richest silver deposit ever discovered, it embodies all of the adventure and romance of America's Wild West.

Carson City was little more than the proverbial two-horse town until the Comstock Lode was discovered nearby in 1859. This fabulous mineral claim produced more than $400 million in silver and gold (in 19th century dollars), and changed the West forever. Comstock wealth created the State of Nevada, built the city of San Francisco, and financed the Civil War. It also made the fortunes of the some of California's most prominent families, including that of the newspaper mogul William Randolph Hearst.

The Carson City Mint was only open for 23 years and only minted silver dollars for 13 years. Plagued by corruption and embezzlement, and with the flow of Comstock silver drying up, this true Wild West Mint ceased all coin production in 1893. Morgan silver dollars carrying the "CC" mintmark are therefore extremely popular among collectors because of their colorful Old West history, small mintage figures, and short minting history.