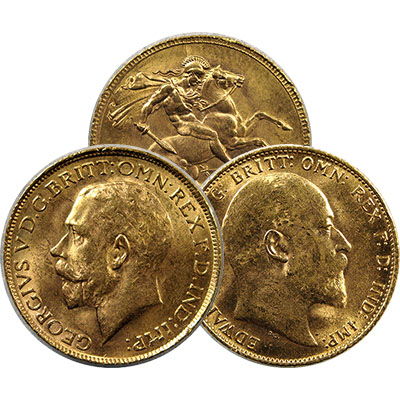 Britain Gold Sovereign "Kings" are an excellent way to buy bulk gold. Similar in size and weight to modern 1/4-oz American Gold Eagle bullion coins, they offer all of the investment advantages of gold bullion plus relative scarcity, historical importance, ongoing collector demand, and financial privacy--all for little more than the cost of modern bullion coins.

The world's most recognized gold coins

British sovereigns are perhaps the most widely recognized gold coins in the world. They were minted for more than 100 years in 11 designs at seven Royal Mints on five continents, during the era when "the sun never set on the British Empire." So universally recognized are gold sovereigns that they were even included in U.S. aviator survival kits during World War II and Operation Desert Storm.

Unlike most forms of gold bullion, British gold sovereigns are exempt from broker reporting requirements to the IRS. In our opinion, they're better than bullion for bulk gold buyers.