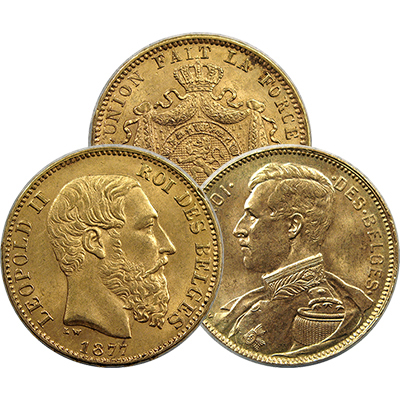 The Kingdom of Italy began minting 20 lire gold coins in 1861, matching their size and gold content to the French 20 franc, which later became the basis for the Latin Monetary Union.

The most readily avaialble of the three designs are the Victor Emmanuel II and Umberto I. Both usually trade at prices relatively close to their gold content value in slightly circulated or BU grades, making them excellent alternatives to modern bullion coins for bulk gold investors.

In 1866, France and Italy were joined by Belgium and Switzerland in forming the Latin Monetary Union. The aim was to facilitate trade among member nations by standardizing the size and weight of their currencies. The French 20 franc, which has been established for weight and size by Napoleon in 1803, was chosen as the model.

Other nations soon followed suit, including Spain, Austria-Hungary, Greece, Romania, and Serbia. The LMU continued until 1927, establishing something like the euro more than a century before the European Union was born.